The city of San Antonio and its people are known for their hospitality and generosity, and one such charitable organization, the women-led Impact San Antonio, embodies those very qualities with its annual giving. It is one-of-a-kind in that it allows members to participate first-hand in giving back to the local community. The president of Impact San Antonio, Lora Watts, described this unique concept as the catalyst for her desire to become a member back in 2010, just one year after retiring from a career with AT&T and attending her first recruitment event for the organization.

“I joined immediately,” Watts said. “I loved the model of the organization.”

What sets Impact San Antonio apart from other grant-making organizations is how member contributions make their way to local agencies, because not only does 100% of a member’s $1,000 contribution go directly to grants, but each member plays a part in hand-picking grant recipients with a vote on grant awards night. Memberships can be on an individual basis or shared, with two to four people contributing to the $1,000 membership.

Impact SA awards $100,000 grants in five focus areas: Arts and Culture; Education, Environment, Recreation, and Preservation; Family; Health; and Wellness. Last year’s grant recipients include the Magik Theatre, Northside Education Foundation/Construction Careers Academy, The Ecumenical Center, and Project Mend. Watts explained this year’s grants are special, because it will mark the first time in Impact SA’s history where it can award over $500,000 in grants.
“As long as Impact has been in existence, its vision as an organization has been to have a membership of 500 or more,” she said. 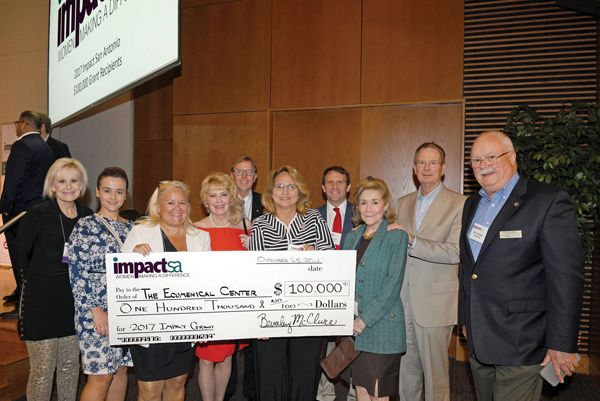 This year’s membership of just fewer than 700 helped it come a long way from its start back in 2004 when Kelly Hutchinson first began Impact SA. Her mother was part of an Impact in Florida, and taking what she learned from there to bring it to the Alamo City, Impact SA was able to award a grant of $25,000 during its first year. In its almost 15-year tenure, Impact SA will have awarded over $3.2 million in grant awards.

Another stand-out quality of Impact SA is not only is it contributing financially to local agencies in the greater SA area and the seven surrounding counties, but its members work to guide agency applicants through the entire process from beginning to end, all as a volunteer organization. Members train agencies to be helpful with their applications, and if chosen as a finalist, offer more guidance in preparing a presentation for grant awards night. Once grants are awarded, oversight is provided to agencies where they are assigned liaisons, consisting of members, who track the progress of the project. These member liaisons ensure the money is spent as outlined in an agency’s application, and in turn, members love seeing how well the financial contribution is being invested and managed.

All of this contributes to Impact SA’s ability to empower women to make a difference. Watts said this is something she enjoys most about being part of the organization. “I love that I have met so many different women that are like-minded, who want to make a difference in their community,” she said. “That is so special to me, and I take great pride in that.”